I didn’t make this happen, but I have to write about it!

The “Biden Bias.” That’s my nickname for it; this situation Joe Biden has put us in. If our eyes are open, we can’t find the guy. If someone asks us who’s the best Presidential candidate, we have to answer based on what we know.

I didn’t do it! Joe did! I really don’t know what to say!

When asked for an “unbiased” opinion regarding the “pros and cons” of each candidate … I can do that! But it won’t feel very unbiased.

The “unbiased opinion” is an oxymoron. There is no such thing. It took a car ride with my dad yesterday to realize this. He’s right, it’s impossible; you can’t have an “unbiased opinion!” What was I thinking!

I’d already written my unbiased opinion, though, and posted it online, and in only one day it registered over six-thousand views! I was at the top of a bunch of answers on Quora out of over a hundred answers!

I do like it when Quora shows my answers. I love to write, and it’s best when someone’s reading it. So thanks, my fellow Quorans! Please give me more upvotes! I got the eyeballs, though, that’s the first step!

Here’s the answer I wrote:

Original question: I am undecided between Trump and Biden. Is there anyone who can give an unbiased opinion as to the pros and cons of each candidate? So much of the “expert” opinions out there are totally one sided.

I’m a news reporter, in radio for 25-years, and I find it impossible to dismiss any part of a news piece. I research until I’ve gotten everything.

One of the problems is when there’s a lack of facts, a lack of campaigning, a lack of explanation when questioned. For a news reporter, my job is done when I look, though I may not find what I’m looking for.

Having looked for every angle and listened to every side of the story, I can easily compare these two candidates. As a 58 year-old American, I’m not alone in seeing this is the most lopsided election in American history. It should be easy to see differences between candidates, though it may sometimes be hard to believe.

It’s hard to believe, for example, that Joe Biden does so little campaigning, and that his history involves blatant lying. When he previously ran for President, many years ago, he is on video being challenged by all the top news reporters after he (also on video) blatantly lied about being first in his class in college, when he was actually one of the last in his class. Imagine being last in your class; that’s one thing. Then imagine lying about it – nothing but insult to injury. Now imagine lying about it as if no-one’s going to challenge it; that’s just insulting to voters. This information is readily available. I’ve compiled many well-balanced looks at these two candidates, in the form of articles on my blog. For example, History 101: The Missing Pieces is a great place to start; it’s a somewhat lengthy article I wrote for this purpose, to introduce someone to “what we know so far.”

This is a video of a Joe Biden rally, and they all look like this:

And this is a photo of a Donald Trump rally. They all look like this: 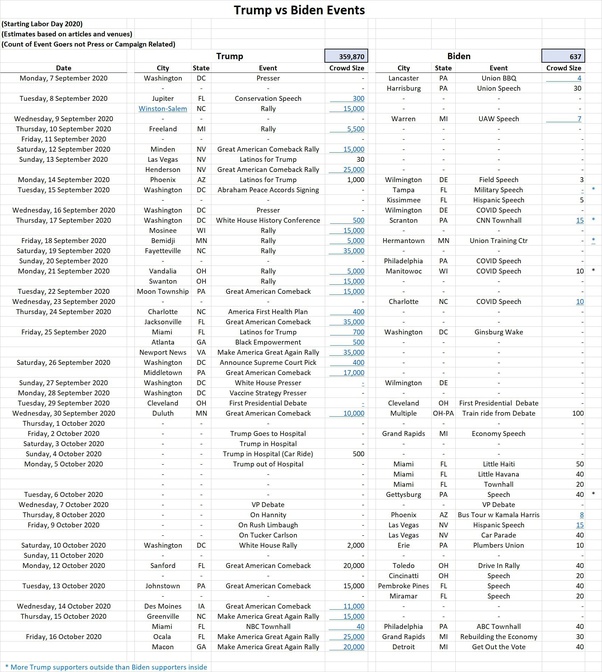 This is not incorrect information. Trump’s rallies are attended reliably by 10–40 THOUSAND voters, while Bidens are attended by 10–40 period. Just 10–40.

That’s what I mean; the more I tell you, the more unbelievable. This is, as I mentioned, a lopsided election.

The Democratic candidates have never denounced violence, and many, including Kamala Harris and Nancy Pelosi, have encouraged people to protest when confronted with a question about it, while Donald Trump has offered to help protect cities where violence is occurring, only to be called nasty things by Democratic mayors. There’s a big wave of loyalty among Democrats for their cause, although their cause is either a mystery or something they just don’t want to talk about. Who’s causing all the violence may not be the real question, but who wants to stop the violence, now and for good, is easy to see.

This is certainly why police organizations, including the national FOP, endorse Trump, who aligns with “law and order.” Here’s some cops for Trump:

Joe Biden and Kamala Harris both have blatantly refused to answer a critical question about “packing the Supreme Court,” which means adding members to create a court that favors one political party. Biden went so far as to tell voters “[Voters will] know my opinion on court-packing when the election is over.” An appropriate cartoon came out pretty quickly, showing a man proposing to his girlfriend, saying “I’ll tell you my position on infidelity after we’re married.” You think that’s good faith campaigning? Most people think it’s astonishing.

Harris shows her colors when asked this question. The court-packing issue came up because Trump had an opportunity to replace justice Ginsberg, who died. Though it was perfectly legal, and many say essential, to replace Ginsberg right away, Democrats showed bitterness, because Ginsberg was one of them, but worse, they showed they have no respect for the election or the voting public.

And while there are more issues and instances that can help you decide, it’s a deep, muddy swamp of lies and trickery. Look at who America believes, a man who is not a career politician, who the career politicians hate because he’s not already indebted to their plans. Their plans, sometimes mysterious, seem to be ongoing, longstanding plans that tie the current players with the Obama administration. Many difficulties the President is feeling have been caused by long inbred corruption within the White House and Congress. President Trump assumed office with no political experience and a house full of corrupt people.

The newest story involves the FBI sitting on hard drive information that exonerates Trump from tiresome accusations by Democrats that he colluded with Russians to effect the results of the 2016 election, while at the same time this information allegedly shows the same scandal Trump was accused of by the Democrats being actually done by the Democrats in 2016. The hard drive from Biden’s son’s broken computer allegedly shows Hillary Clinton and Barack Obama colluded with Russians to alter the results of the 2016 election (not well enough to win).

But the biggest problem is the media (news organizations) being influenced by Democrats. Hundreds of TV stations and newspapers are owned by Rupert Murdoch, and Biden is raising huge sums of money from rich Democrats who wish to get back to the original plan, the “whatever” plan that Trump interrupted.

Without news telling us what’s going on, the average voter is not to blame for not understanding what’s going on. There’s hundreds of examples of inappropriate and unpatriotic behavior, along with failure to answer questions, among Democrats over the past four years, and most news organizations, including CBS, NBC and ABC, have been skewing the news to make Trump look bad.

If you don’t believe that, I can understand. It’s totally unprecedented, in this country at least. But the world is getting smaller, and China nearly owns the US by manhandling the world’s economy. Just go shopping on Amazon; you’ll see. The “unreported” news can be found if you look, and includes such things as indoctrinating our children to learn how to protest, to challenge their parents and even the teaching of history is fair game for the new world vision; one report I read said some students have been taught Hitler wasn’t such a bad guy, and the holocaust was caused by the Jews. I saw a video from a parent who was sickened when she started home-schooling this year, watching over her 8 year-old’s shoulder as the teacher taught the child how to protest.

Democratic politicians have been seen involved in violent protests. Hillary Clinton did her college thesis on Saul Alinsky, and his book on how to overthrow a government, a book that details tactics like creating chaos, creating division and accusing your opponent of exactly what you’re doing. It makes it extremely difficult if all you do is watch the news for a bit each day; all you’ll get is biased reporting that makes the President look bad, and lately we’ve been able to uncover surprising information that looks to show Clinton, Obama, Pelosi and Biden were all involved in scandalous activity, exactly the same stuff they’ve been accusing President Trump of (unsubstantiated) for four whole years.

The strength of the Democratic party, I believe, is built on deception, and they will continue to sink in the sand. If they were to win, the fear is they will change our Republic into a Communist nation. Bernie Sanders, for example, is an avowed communist, put forward as a candidate by the same Democrats in charge of the DNC today. Hillary Clinton would have every American housewife hate Trump because of disparaging remarks he made about women in the past, but Clinton wouldn’t take kindly to being reminded of her own husband’s impeachment, and his unfaithful behavior having sex IN THE OVAL OFFICE. And lying about it on television. Makes you think.

The newest data being held by the FBI is said to include information that would have completely eliminated any possibility of Trump’s impeachment, had the FBI acted on the hard drive information a YEAR AGO, when they got it.

That’s why they call it “the swamp,” and Trump, an outsider, wants to drain it.

Keep listening, watching and reading. Follow me on Twitter, where there’s mostly unfiltered discussion, and keep an open mind. This is not a normal election.

The haters will hate; I recommend looking for actual facts.

Original question: I am undecided between Trump and Biden. Is there anyone who can give an unbiased opinion as to the pros and cons of each candidate? So much of the “expert” opinions out there are totally one sided.